Jane derives much pleasure from her attempts to produce attractive, practical and functional pottery and hopes that others gain as much appreciation in the use of the pottery as she achieved in the production.

Jane grew up on a dairy farm at Malanda and lived in that area for her first 36 years.

A career change for her husband saw the next four years on a cape York Peninsula cattle station followed by a nine year stint at the mining town of Weipa.It was here, in 2000, following an unsuccessful attempt to purchase a spoon rest that she came to the conclusion that the only way to get one was to make it herself.

This led to an association and tutelage with well-known Weipa and Burdekin potter, Debbie Ferraris.Since then Jane has developed her own technique in the manufacture of fine functional pottery. A move to Cardwell in 2004 and the commissioning of her own gas kiln and subsequent experimentation with many glazes has seen the evolution of the unique colours and designs. 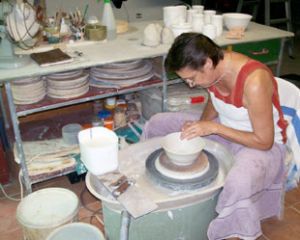