Judy was brought up in a series of Queensland country towns where there was no such thing as an Art teacher.  Her "art" education consisted of the occasional long wet afternoon spent on her stomach on the lounge room floor pouring over a set of old Art Magazines of her mothers.  The magazines gave Judy a thorough grounding in the Old Masters – if no practical experience (Judy still has the magazines).  When Judy finally finished her studies as a Pharmacist, she spent a year with her parents in Warwick and joined an Adult Education class in Oil Painting.  Visiting professional artists provided intensive classes and lectures that have given Judy a sound basis on which to sustain her interest in art throughout the years.

Her stay in Warwick was followed by two years overseas and long hours in many of the magnificient Art Galleries in Europe.

On returning to Australia, the necessity of eating found Judy in Grafton, where she revelled in that combination of all arts .... Theatre.

Health reasons then sent Judy north, and she finished up in Cairns with her spare time divided between Painting and Theatre.  From there to Cardwell in 1970 where Judy opened the town's first Chemist Shop.  Here Judy still painted through the 70's and ran a small Art Group on Landscape Painting.  She also spent a couple of terms at the school teaching some of the children painting.  By 1980 work pressures became too great and there was little time to spare for the luxury of painting but Judy later found that she could manage to "keep her eye in" by painting Australian Wildlife on various wooden items.

Judy is Treasurer of the Gallery and is also involved in the Painting and Sketching group that meets once a month. 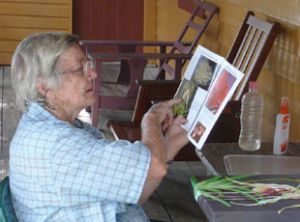